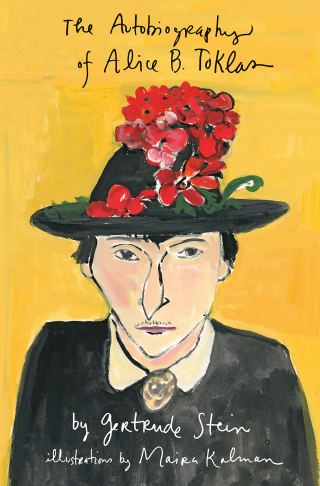 It is not often that one encounters a great love letter to a great love, composed by someone outside the private world of that love, serenading it across the spacetime of epochs and experiences. In my many years of dwelling in the lives and loves and letters of beloved artists, scientists, and writers, I have encountered none more splendid than The Autobiography of Alice B. Toklas Illustrated (public library) by Maira Kalman — an artist who uses her paintbrush the way Stein used her pen, as the instrument of an imagination tilted pleasantly askance from the plane of common thought.

Gertrude Stein published The Autobiography of Alice B. Toklas in 1933, when she was fifty-nine and Alice fifty-six. She had written it at an astonishing pace the previous autumn. Like Alice disguised her memoir of their love as a cookbook, Gertrude disguised hers as an “autobiography” of the beloved under the lover’s byline. It wasn’t, of course, Alice’s autobiography, or even her biography — rather, it was the biography of their love, of early-twentieth-century Paris, of the community of visionary artists and writers who orbited the couple and who came to be known as the Lost Generation — a term Gertrude Stein coined — as they found themselves, in every sense of the term, at Alice and Gertrude’s salons.

The book begins, naturally, not at Alice’s birth but at her fateful first encounter with Gertrude and her coral brooch the day Alice, thirty-three, arrived in Paris as an American expatriate — a moment she eventually recounted in such deeply felt detail on the pages of her slender actual autobiography, animated by a bereavement that never left her in the twenty “empty” years by which she outlived the love of her life.

Kalman introduces the book with her spare and singular poetics:

Alice met Gertrude.
Gertrude met Alice.
Gertrude with her big body.
Big presence.
Alice, a little bird
with a mustache.
And that was that.
A coup de foudre
as we say.
Gertrude wrote this book of
their lives
through Alice’s eyes.
And here it is (happily)
with paintings
to illustrate how it was.

There is so much to delight in and marvel at in Kalman’s uncommon reanimation of this uncommon mausoleum of a love and an epoch. “Who did they know?” she asks, then exclaims: “EVERYBODY.” And then she draws everybody: James Joyce sitting at a table in Sylvia Beach’s Alexandrian bookstore, Hemingway with his fedora and his forthright gaze, Matisse slouched on a park bench, Cézanne, Picasso, Man Ray, all the artists who might not have been the stars they are to us, might not have found their own light, were it not for the hospitable universe of the Toklas-Stein household, for their devoted private patronage and public championship of these bold ideas and aesthetics that shook the plate tectonics of the status quo and formed the colossal landmass of modern art, of modern thought itself.

Captioning each of the paintings is a sentence or fragment from Stein’s narrative that captured Kalman’s curious imagination — sometimes a note of Stein’s subtle, fullhearted humor resonant with Kalman’s own, sometimes the shimmering surface of an amusing aside that whirlpools into the depths of loneliness and melancholy in which all pioneers swim, always an odd detail that compresses cosmoses of meaning into a miniature observation.

But of all the delights in Kalman’s tribute to the Stein classic, none is more delightful than the meta-masterpiece of her tender handwritten afterword — a love letter to Alice and Gertrude’s love. “I am loathe to leave them,” Kalman sighs on a near-blank page at the end, as blank as one feels inside upon leaving a book and the world of its making, then she writes:

This is a love story.
You know.
How two people, joined together,
become themselves.
They cannot breathe right
without each other.

With great subtlety, Kalman makes spare allusion to the ideas and ideologies animating Gertrude and Alice’s era, those ever-twining human impulses for beauty and for terror — the rise of Modernism and of Nazism; the birth of a new science with its delirious portal into the most fundamental building blocks of matter and the deepest, most beautiful realities of nature; the assembling of the building blocks of humanity’s deadliest weapon and ugliest war; and all the while, the lives being lived, the loves being loved, the meals being savored.

Nothing would have happened
without Alice. NOTHING.
It could be that Alice did write
this book. It could be.
Who holds the pen?
Who has the ideas?
What is the atmosphere of the
living room, kitchen, bedroom, salon?
What sharpness of vision. What relishing
of things big and small.
Great fame. A cozy home.
This is a singular story embedded
in a singular time.
That is enough. And more.

Complement Kalman’s impossibly wonderful The Autobiography of Alice B. Toklas Illustrated with Alice’s quietly stirring account of how their love began and a charming modern picture-book about their uncommon life together, then revisit Kalman’s illustrated catalog of unusual delights and her soulful love letter to dogs.