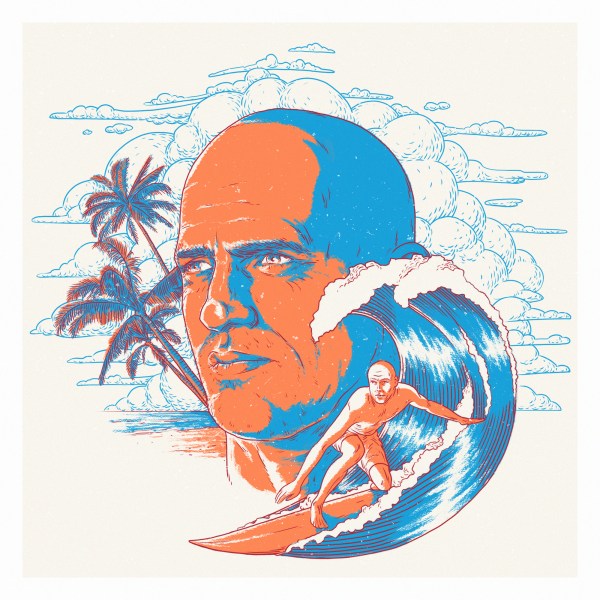 Kelly Slater (@kellyslater) is widely considered the greatest surfer of all time. He holds nearly every major record in the sport, including 11 world titles and 55 career victories. He also has the amazing distinction of being both the youngest and oldest world champion in men’s history. His most dominant days were the mid-’90s, when he won five straight titles between 1993 and 1998.

After topping Mark Richards’ previous record of four straight titles, Kelly tried his hand at retirement in 1999 but failed. He rejoined the tour full-time in 2002, and over the following five years faced his toughest rival in Hawaii’s Andy Irons, who got the better of him for three straight years. Their heated battles became the most compelling in the sport’s history, propelling it to new heights. Kelly finally reclaimed the title in 2005 and repeated in 2006. Kelly swapped titles with Mick Fanning in the years that followed.

Kelly will also be remembered for the wave pool technology that he and his team of engineers at Kelly Slater Wave Co. brought to life in 2015, which has the potential to reshape the surfing landscape for generations.

Brought to you by Dry Farm Wines, Helix Sleep, and LMNT. More on all three below.

This episode is brought to you by Dry Farm Wines. I’m a wine drinker, and I love a few glasses over meals with friends. That said, I hate hangovers. For the last few months, all of the wine in my house has been from Dry Farm Wines. Why? At least in my experience, their wine means more fun with fewer headaches. Dry Farm Wines only ships wines that meet very stringent criteria: sugar free (less than 0.15g per glass), lower alcohol (less than 12.5% alcohol), additive free (there are more than 70 FDA-approved wine-making additives), lower sulfites, organic, and produced by small family farms.

All Dry Farm Wines are laboratory tested for purity standards by a certified, independent enologist, and all of their wines are also backed by a 100% Happiness Promise—they will either replace or refund any wine you do not love. Last but not least, I find delicious wines I never would have found otherwise. It’s a lot of fun. Dry Farm Wines has a special offer just for listeners of the podcast—an extra bottle in your first box for just one extra penny. Check out all the details at DryFarmWines.com/Tim.

This podcast episode is also brought to you by Helix Sleep! Helix was selected as the #1 best overall mattress pick of 2020 by GQ magazine, Wired, Apartment Therapy, and many others. With Helix, there’s a specific mattress for each and every body’s unique taste. Just take their quiz—only two minutes to complete—that matches your body type and sleep preferences to the perfect mattress for you. They have a 10-year warranty, and you get to try it out for a hundred nights, risk free. They’ll even pick it up from you if you don’t love it. And now, to my dear listeners, Helix is offering up to 200 dollars off all mattress orders plus two free pillows at HelixSleep.com/Tim.

This episode is also brought to you by LMNT! What is LMNT? It’s a delicious, sugar-free electrolyte drink-mix. I’ve stocked up on boxes and boxes of this and usually use it 1–2 times per day. LMNT is formulated to help anyone with their electrolyte needs and perfectly suited to folks following a keto, low-carb, or Paleo diet. If you are on a low-carb diet or fasting, electrolytes play a key role in relieving hunger, cramps, headaches, tiredness, and dizziness.

LMNT came up with a very special offer for you, my dear listeners. They’ve created Tim’s Club: Simply go to DrinkLMNT.com/TIM, select “Subscribe and Save,” and use promo code TIMSCLUB to get the 30-count box of LMNT for only $36. This will be valid for the lifetime of the subscription, and you can pause it anytime.

Want to hear another episode with someone else who’s devoted their life to their sport? Listen in on my conversation with six-time Mr. Olympia Dorian Yates, in which we discuss specific workouts, how he warms up, the realities of PEDs, common mistakes, his relationship to pain, self-talk when setting records (or bouncing back), his favorite books, and much more.