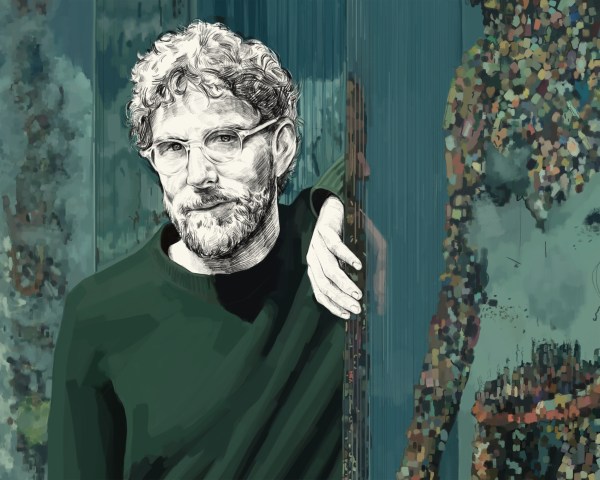 “I don’t worry about inspiration as much as system overload.”

Dustin Yellin (@dustinyellin) is an artist who lives in Brooklyn, New York, and is the founder and director of Pioneer Works, a multidisciplinary cultural center in Red Hook, Brooklyn, that builds community through the arts and sciences to create an open and inspired world. He and his incredible work have been featured by media and organizations including The New York Times, Artforum, Vanity Fair, and TED.

Drawing on both modernism and the sacred tradition of Hinterglas painting, Yellin primarily works through a unique form of three-dimensional photomontage, in which paint and images clipped from various print media are embedded within laminated glass sheets to form grand pictographic allegories, which Dustin calls “frozen cinema.” These totemic and kaleidoscopic works often plumb the history and fate of human consciousness within the Anthropocene (see examples here and in the slideshow below in this post).

Dustin’s art has been exhibited at or with the Amorepacific Museum, Brooklyn Museum, City Museum, Colección Solo, Corning Museum of Glass, The Kennedy Center, Lincoln Center for the Performing Arts, Museo Del Palacio de Bellas Artes, SCAD Museum of Art, Tacoma Museum, and Creative Time, among many others. He holds an honorary Doctor of Humane Letters degree from the Savannah College of Art and Design.

P.S. See the slideshow below for some of his incredible work. All images are courtesy of the artist and are shared with permission.

Brought to you by Wealthfront, Zero, ExpressVPN. More on all three below.

This episode is also brought to you by Zero! Zero is the world’s most popular fasting app and is helping millions of users around the world unlock healthier, longer lives by harnessing the power of fasting.

Whether you’ve been fasting for years or are just getting started, Zero equips you with exclusive videos from people like Peter Attia, personalized fasting plans, and advanced health data to keep you on track. Listeners of this podcast—that’s you!—can get 30% off a one-year Zero Plus subscription, an upgrade for power users that I’m now using. Visit ZeroFasting.com/Tim, and your discount will be automatically applied.

This episode is brought to you by ExpressVPN. I’ve been using ExpressVPN since last summer to make sure that my data is secure and encrypted, without slowing my Internet speed. If you ever use public Wi-Fi at, say, a hotel or a coffee shop, where I often work and as many of my listeners do, you’re often sending data over an open network, meaning no encryption at all.

A great way to ensure that all of your data is encrypted and can’t be easily read by hackers is by using ExpressVPN. All you need to do is download the ExpressVPN app on your computer or smartphone and then use the Internet just as you normally would. You click one button in the ExpressVPN app to secure 100% of your network data. Use my link ExpressVPN.com/Tim today and get an extra three months free on a one-year package!

Want to hear an episode with another artist/explorer who also believes in collaboration over competition? Be sure to listen to my conversation with David Yarrow in which we discuss breaching great white sharks, being spat on by John McEnroe, FIGJAM, ghost towns, capturing Diego Maradona in his element, and much more.