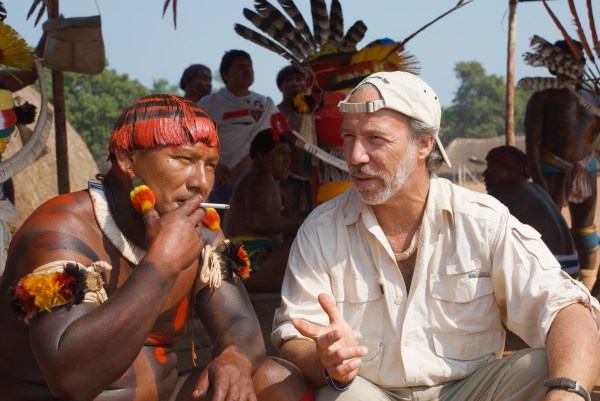 Dr. Mark Plotkin (@DocMarkPlotkin) is an ethnobotanist who serves as president of the Amazon Conservation Team, which has partnered with 55 tribes to map and improve management and protection of 80 million acres of ancestral rainforests. Educated at Harvard, Yale, and Tufts, Plotkin has since spent much of the past four decades studying the shamans and healing plants of tropical America from Mexico to Argentina, although much of his work focuses on the rainforests of the northeast Amazon. He is best known to the general public as the author of the book Tales of a Shaman’s Apprentice, one of the most popular books about the rainforest. His new book from Oxford Press is The Amazon: What Everyone Needs to Know.

His upcoming podcast series is titled Plants of the Gods: Hallucinogens: Culture, Conservation, History and Healing, and it will be coming out in late October. More information will be available on Mark’s website.

Brought to you by Wondery Plus, Four Sigmatic, and Theragun. More on all three below.

This episode is brought to you by Wondery Plus! People always ask me what podcasts I listen to, and the truth is… I don’t listen to many, given all the projects I’m working on. One exception is Business Wars from the podcast network Wondery. One great way to listen to it is with a Wondery Plus membership, which allows you to enjoy Business Wars one week before the episodes are available anywhere else and ad free.

Check out Wondery Plus today with this exclusive offer for listeners of this podcast: get 25% off a one-year membership at WonderyPlus.com/Tim.

This podcast is brought to you by Four Sigmatic and their delicious mushroom coffee, featuring lion’s mane and Chaga. It tastes like coffee, but there are only 40 milligrams of caffeine, so it has less than half of what you would find in a regular cup of coffee. I do not get any jitters, acid reflux, or any type of stomach burn. It’s organic and keto friendly, plus every single batch is third-party lab tested.

You can try it right now by going to FourSigmatic.com/Tim and using the code TIM. You will receive up to 39% off on the lion’s mane coffee bundle.  Simply visit FourSigmatic.com/Tim. If you are in the experimental mindset, I do not think you’ll be disappointed.

This episode is brought to you by Theragun! Theragun is my go-to solution for recovery and restoration. It’s a famous, handheld percussive therapy device that releases your deepest muscle tension. I own two Theraguns, and my girlfriend and I use them every day after workouts and before bed. The all-new Gen 4 Theragun has a proprietary brushless motor that’s surprisingly quiet. It’s easy to use and about as quiet as an electric toothbrush.

Go to Theragun.com/TIM right now and get your Gen 4 Theragun today, starting at only $199.

Want to hear another episode with someone seeking to understand humanity’s relationship with the natural world’s unknown variables? Listen to my conversation with Paul Stamets, an intellectual and industry leader in the habitat, medicinal use, and production of fungi.