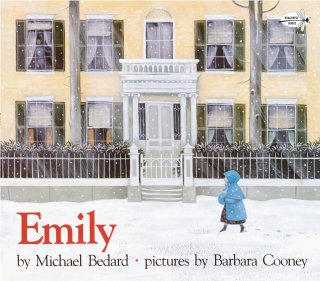 “I love so to be a child,” Emily Dickinson (December 10, 1830–May 15, 1886) wrote to her brother when she was twenty-two. “I wish we were always children, how to grow up I don’t know.” She would go on to draw on that inner child in her profoundest and most prescient meditations on reality, proffered in small and staggering poems, poems that bent language into new forms of meaning, bent tradition into new forms of truth, bent the reality of her existence into a myth, until her very life became a poem — a contour of truth on a canvas of interpretation.

Out of that lacuna between fact and fiction rises the wondrous 2002 picture-book Emily (public library) by author Michael Bedard and artist Barbara Cooney — the story of a little girl whose parents move into a house across the street from Dickinson’s home in Amherst, the famous pale-yellow Homestead.

When a letter is slipped under the door one day for the girl’s pianist mother — a letter containing an invitation for a visit and a pressed flower, just like those in Dickinson’s actual and astounding forgotten herbarium — the young narrator is instantly enchanted by the enigmatic woman across the street, known as The Myth, rumored to dress only in white, though she never leaves her house, and devoted to a strange line of work called poetry.

While fictional, the protagonist of the story may well be Millicent Todd, daughter of Mabel Loomis Todd — the great love and lover of Emily’s brother for the last two decades of his life (while he was married to Susan, the great love and muse of Emily’s own life). It was Mabel who came to the Homestead to play piano while Emily hid upstairs, sending down brandy and poems; Mabel who coined the poet’s moniker “the Myth of Amherst”; Mabel who painted the flowers Emily had once pressed into a letter in a letter, then had the painting grace the cover of the first edition of her revolutionary poems, published posthumously and edited by Mabel herself.

The day after the letter arrives, spellbound by this enigmatic neighbor and her otherworldly art, the little girl unspools her curiosity while watering flowers alongside her father as her mother’s piano makes the house bloom with music:

“What does she look like?” I said. “The lady in the yellow house?”

“I don’t know, my dear. Not many see her face-to-face. They say that she is small, though, and that she dresses always in white.”

We moved from pot to pot. He plucked the wilted petals as he went.

“Is she lonely, do you think?”

“Sometimes, I suppose. We all are lonely sometimes. But she has her sister to keep her company, and like us she has her flowers. And they say that she writes poetry.”

He laid the wilted petals in his palm. “Listen to Mother play. She practices and practices a piece, and sometimes a magic thing happens and it seems the music starts to breathe. It sends a shiver through you. You can’t explain it, really; it’s a mystery. Well, when words do that, we call it poetry.”

The next morning, the little girl takes her mother’s hand and the two cross the snowy day to visit their mysterious neighbor. Emily’s sister greets them warmly, then tells them what all visitors are told — that the poet cannot see them, but will listen from upstairs.

And then, while her mother plays the piano beneath the famous painting of the Dickinson children, the young narrator quietly slips out of the parlor and up the stairs, where she proceeds to have an unexpected and lovely encounter with the slight, birdlike, chestnut-haired reality behind The Myth.

What passes between them in the final pages of this tender and soulful book is nothing less than living poetry.