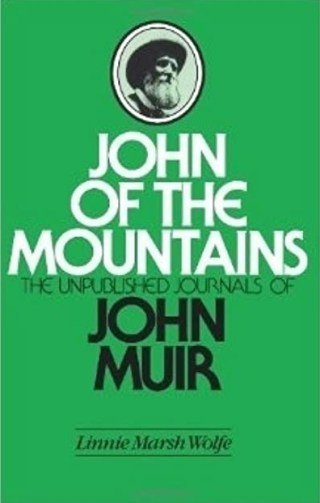 In the final year of his twenties, penniless and hungry for meaning, John Muir (April 21, 1838–December 24, 1914) left the Wisconsin frontier, where his family had emigrated from Scotland two decades earlier in search of a better life, to wander across the wilderness of his new homeland. He began recording his encounters with nature, with its beauty and its capacity for transcendence, in a small pocket notebook — the first of the sixty journals he would keep for the remainder of his life, on the pages of which he emerged as the prose-poet laureate of nature, his soulful sensibility echoing across the generations in the writings of lyrical scientists like Rachel Carson and modern naturalists like Terry Tempest Williams and Robert Macfarlane. He would live as an ecstatic lover of the wilderness and die as a founding father of the National Parks.

Growing up, the notion of becoming a writer never entered Muir’s imagination. Instead, he dreamt of becoming an inventor; then a physician; then a botanist. He took to “the making of books” only late in life, recounting: “When I first left home to go to school, I thought of fortune as an inventor, but the glimpse I got of the Cosmos at the University, put all the cams and wheels and levers out of my head.” It was during those school years that the polymath Alexander von Humboldt’s epoch-making book Kosmos first captivated the popular imagination with the notion of nature as a cosmos of connections, inspiring the young Walt Whitman to declare that “a leaf of grass is no less than the journey work of the stars” and the young John Muir to write his address on the flyleaf of his first journal as “John Muir, Earth-Planet, Universe.” On the pages of his journals, Muir would arrive at his animating credo that “when we try to pick out anything by itself, we find it hitched to everything else in the universe.”

Still in his twenties, a century and a half before neurologists began uncovering the healing power of nature, Muir began discerning the immense psychological and physiological rewards of immersion in the living cosmos of nature and its uncommon salve for the various malaises, distempers, and wearinesses of body and mind we accrue in the course of living as thinking, feeling creatures in a perpetually precarious world. In one of those notebooks, posthumously collected in the 1938 treasure John of the Mountains: The Unpublished Journals of John Muir (public library), he writes:

Nature, while urging to utmost efforts, leading us with work, presenting cause beyond cause in endless chains, lost in infinite distances, yet cheers us like a mother with tender prattle words of love, ministering to all our friendlessness and weariness.

In an entry from the journals he kept during his transformative time in the Sierra Mountains, he celebrates nature not only as a mental, emotional, and spiritual buoy but as a holistic sanity tonic distilled in the body. Well before Walt Whitman devised his marvelous outdoor workout while recovering from his paralytic stroke, well before William James advanced his revolutionary theory of how our bodies affect our feelings, Muir writes:

Gain health from lusty, heroic exercise, from free, firm-nerved adventures without anxiety in them, with rhythmic leg motion in runs over boulders requiring quick decision for every step. Fording streams, tingling with flesh brushes as we slide down white slopes thatched with close snow-pressed chaparral, half swimming or flying or slipping — all these make good counter-irritants. Then enjoy the utter peace and solemnity of the trees and stars… Find a mysterious presence in a thousand coy hiding things.

In another fragment from his Yosemite notebook bearing the heading “Indian Summer,” in a sentiment Colette would echo generations later in her soulful meditation on the splendor of autumn and the autumn of life as a beginning rather than a decline, Muir reflects on the singular, counterintuitive life-affirmation of autumn:

In the yellow mist the rough angles melt on the rocks. Forms, lines, tints, reflections, sounds, all are softened, and although the dying time, it is also the color time, the time when faith in the steadfastness of Nature is surest… The seeds all have next summer in them, some of them thousands of summers, as the sequoia and cedar. In the holiday array all go calmly down into the white winter rejoicing, plainly hopeful, faithful… everything taking what comes, and looking forward to the future, as if piously saying, “Thy will be done in earth as in heaven!”

Earth hath no sorrows that earth cannot heal, or heaven cannot heal, for the earth as seen in the clean wilds of the mountains is about as divine as anything the heart of man can conceive!

Couple the altogether soul-salving John of the Mountains with a cinematic tribute to Muir’s wilderness legacy, then revisit Mary Shelley on nature’s beauty as a lifeline to regaining sanity and other beloved writers on the natural world as a remedy for depression.