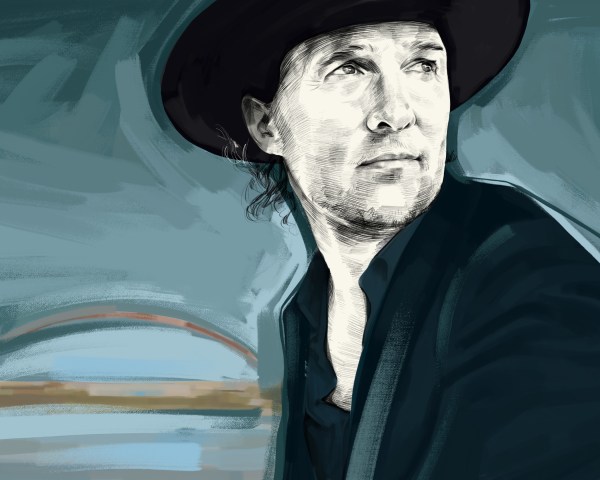 “If all we’re doing is asking ourselves questions, but never coming up with an answer, well, that can lead to some very imbalanced insanity at times.”

Matthew McConaughey (@McConaughey) is a Texas native and one of Hollywood’s most sought-after leading men. A chance meeting in Austin with casting director and producer Don Phillips led him to director Richard Linklater, who launched the actor’s career in the cult classic Dazed and Confused. Since then, he has won an Academy Award for his portrayal of Ron Woodroof in Dallas Buyers Club, appeared in more than 40 feature films that have grossed more than $1 billion, and has become a producer, director, and philanthropist with his Just Keep Livin’ Foundation—all the while sticking to his Texas roots and “jk livin’” philosophy.

McConaughey also serves as creative director for Wild Turkey and has co-created his own bourbon, Longbranch. He serves as Minister of Culture/M.O.C. for the University of Texas Athletic Department and the Austin FC Soccer Club, where he is part owner. McConaughey will launch his first book, Greenlights, on October 20, 2020. He currently resides in Austin, Texas, with his wife Camilla and their three kids while he is a professor at the University of Texas in Austin.

This episode is brought to you by Helix Sleep! Helix was selected as the #1 best overall mattress pick of 2020 by GQ magazine, Wired, Apartment Therapy, and many others. With Helix, there’s a specific mattress for each and every body’s unique taste. Just take their quiz—only two minutes to complete—that matches your body type and sleep preferences to the perfect mattress for you. They have a 10-year warranty, and you get to try it out for a hundred nights, risk free. They’ll even pick it up from you if you don’t love it. And now, to my dear listeners, Helix is offering up to 200 dollars off all mattress orders plus two free pillows at HelixSleep.com/Tim.

This episode is brought to you by Magic Spoon cereal! Magic Spoon is a brand-new cereal that is low carb, high protein, and zero sugar. It tastes just like your favorite sugary cereal. Each serving has 11g of protein, 3g of net carbs, 0g of sugar, and only 110 calories. It’s also gluten free, grain free, keto friendly, soy free, and GMO free. And it’s delicious! It comes in your favorite, traditional cereal flavors like Cocoa, Frosted, and Blueberry.

Magic Spoon cereal has received a lot of attention since launching last year. Time magazine included it in their list of Best Inventions of 2019, and Forbes called it “the future of cereal.” My listeners—that’s you—get free shipping and a 100% happiness guarantee when you visit MagicSpoon.com/Tim and use code TIM.

Want to hear an episode with a friend Matthew and I have in common? Listen to my most recent conversation with Ryan Holiday in which we discuss using Stoicism to cope with pandemic lockdowns, managing fear when everything seems out of control, fast decisions versus rushed decisions, and much more.