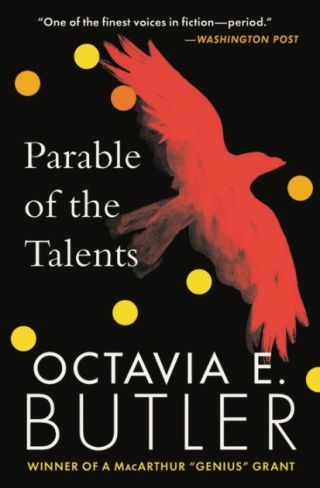 After the glorious accident of having been born at all, there are myriad ways any one life could be lived. The lives we do live are bridges across the immense river of possibility, suspended by two pylons: what we want and what we make. In an ideal life — a life of purpose and deep fulfillment — the gulf of being closes and the pylons converge: We make what we want to see exist.

This interplay is what Octavia Butler (June 22, 1947–February 24, 2006) explores throughout Parable of the Talents (public library) — the second part of her oracular Earthseed allegory, which also gave us Butler’s acutely timely wisdom on how (not) to choose our leaders.

More than a century after Walt Whitman — another rare seer of truths elemental and eternal, another poetic prophet of the world to come, who made what he wanted to see exist and in making it helped bring that world about — wrote that “there is, in sanest hours, a consciousness, a thought that rises, independent, lifted out from all else, calm, like the stars, shining eternal,” Butler writes:

Self is body and bodily perception. Self is thought, memory, belief. Self creates. Self destroys. Self learns, discovers, becomes. Self shapes. Self adapts. Self
invents its own reasons for being. To shape God, shape Self.

All prayers are to Self
And, in one way or another,
All prayers are answered.
Pray,
But beware.
Your desires,
Whether or not you achieve them
Will determine who you become.

Butler’s sentiment is only magnified by knowing that the word desire derives from the Latin for “without a star,” radiating a longing for direction. It is by wanting that we orient ourselves in the world, by finding and following our private North Star that we walk the path of becoming.

To become, of course, is no easy task — to become, that is, what you yourself desire to be, without mistaking your culture’s or your idols’ or your lover’s desires for your own. E.E. Cummings knew this when he wrote half a century before Butler that “to be nobody-but-yourself — in a world which is doing its best, night and day, to make you everybody else — means to fight the hardest battle which any human being can fight.” You win the fight, Butler intimates, by the clarity of your purpose and the perseverance with which you pursue it:

If you want a thing — truly want it, want it so badly that you need it as you need air to breathe, then unless you die, you will have it. Why not? It has you. There is no escape. What a cruel and terrible thing escape would be if escape were possible.

To want what you want so fiercely, to love it so absolutely, is not a personal indulgence in hubris or delusion — it is, Butler affirms, the mightiest antidote to the terrors of being alive and, in consequence, the fuel for your most generous contribution to the world:

Love quiets fear.
And a sweet and powerful
Positive obsession
Blunts pain,
Diverts rage,
And engages each of us
In the greatest,
The most intense
Of our chosen struggles.

Enlivening as this notion might be, even more enlivening is its manifestation in the shared struggle — for at its best, the art born of these private obsessions in the crucible of the Self goes on to touch other Selves, dissolving the isolating illusion of separateness and aloneness to furnish, in Iris Murdoch’s lovely phrase, “an occasion for unselfing.”