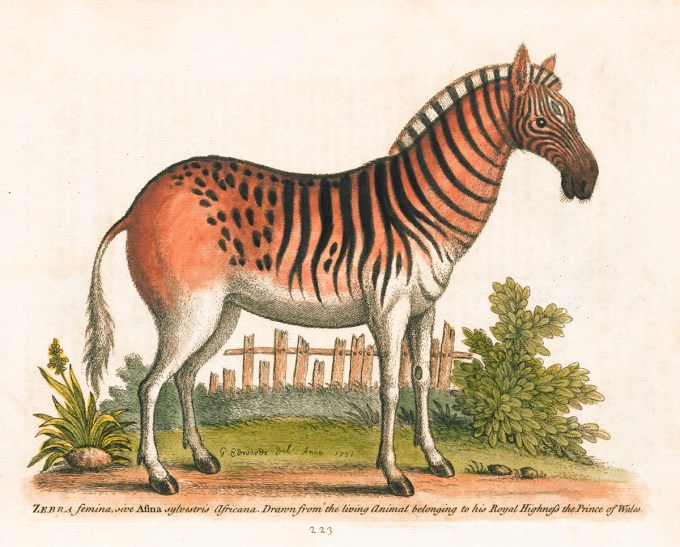 If the legendary nanogenarian cellist Pablo Casals was right, as I trust he was, that working with love prolongs your life, and if Walt Whitman was right, as I know he was, that an intimacy with the natural world is the key to robust mental and physical health, then the English naturalist and pioneering ornithologist George Edwards (April 3, 1694–July 23, 1773) owed his longevity, which eclipsed the life expectancy of his time and place by decades, to the extraordinary creative vitality with which he reverenced nature in his work.

Born into a humble family and raised under the tutelage of clergymen, Edwards awoke to the wondrous world of natural history art and science as a teenager by an improbable turn of chance. When a wealthy relative of the merchant with whom Edwards was apprenticing died, it was decided that the man’s colossal book collection was to be moved into the apartment where the young man was boarding. Inconvenienced as he was by the spatial assault of tomes, Edwards suddenly had access to the equivalent of a private university library — more knowledge than the vast majority of his peers could touch in a lifetime. Day after day, night after night, he found himself absorbed in these rapturous portals into poetry, astronomy, classical sculpture, and natural history. Suddenly, the life-path he had been set on — the pursuit of wealth through commerce — seemed so small and so impoverished of imagination.

Barely out of his teens, Edwards left England to travel through the Continent, determined to broaden his mind. When he returned a month later, he wandered London for two years, young and unemployed and unemployable in his restive longing for something grander than mere money-work. He left again, not sure where to or what for, but as he wandered the fjords of Norway away from human habitation, watching the seabirds, watching the sky, watching the subtlest seasonal changes of the trees and flowers, something awoke in him, something was answered.

Upon returning to London, he devoted himself to learning everything the era’s science could teach him about the living world, of which nothing enraptured him more than the feathered wonders of the sky. The more he read about the anatomy and natural history of birds, the more he fell under the spell of their science and their splendor. He spent his limited means on the best bird paintings he could find, studied them closely with a savage admiration, then began making drawings of his own. Without formal instruction, he proceeding only on the wings of his enthusiasm and the encouragement of fellow natural history painting enthusiasts.

So began a lifelong devotion to making sense of nature and giving shape to its enchantments. In his late thirties, on the recommendation of the founder of the British Museum, who had been commissioning him as a natural history illustrator for more than a decade, Edwards became librarian of London’s venerable Royal College of Physicians — a post he held until the final years of his long life.

A self-taught artist, a scientist a century before the word scientist was coined, George Edwards would be remembered by his friends as a man “of a middle stature, rather inclined to corpulence, of a liberal disposition and a cheerful conversation,” a man of great politeness but entirely unaffected, “free from all pedantry and pride.” He would be remembered by history as the father of British ornithology and one of the greatest natural history illustrators who ever lived.

Although birds were his greatest passion, he depicted with equally meticulous draughtsmanship and great tenderness creatures as varied as the Indian grey mongoose, the zebra of the African savannahs, and the tiny American mud-tortoise. More than that, like the polymathic mathematician Mary Somerville, for whom the word scientist was coined a century later, Edwards intuited that a true understanding of nature requires not the conquest of any particular region of knowledge but an integration of the different regions. One of his closest and most erudite friends would recall that this self-educated polymath “seemed to have attained to universal knowledge,” conversing readily and rapturously about “almost every part of science.”

The bookseller who would acquire Edwards’s vast collection and steward his legacy would come to write of his approach to the work:

He never trusted to others what he could perform himself; and often found it fo difficult to give satisfaction to his own mind, that lie frequently made three or four drawings to delineate the object in its most lively character, attitude, and representation.

In his last major work, Edwards endeavored to distill a life’s worth of what had most awed him in the natural world to which he had devoted his days and nights. This became his bilingual three-volume Gleanings of Natural History: Exhibiting Figures of Quadrupeds, Birds, Insects, Plants &c., Most of Which Have Not, Till Now, Been Either Figured or Described — more than six hundred of Earth’s most astonishing life-forms of land, sky, and sea, illustrated in consummate copper-plate engravings, their natural history expounded in English and French.

Upon the completion of this life’s work in 1764, Edwards’s vision — his great instrument of comprehension and celebration — had already begun failing and he grew unable to draw. How it must have gladdened his heart to receive an ardent letter of appreciation from Carl Linnaeus himself, who painstakingly annotated the index of Edwards’s Gleanings with the Linnaean name of each species in the three volumes.

Many of the species are now commonly known by different names, many have grown endangered, and some are entirely unknown to the common reader, for they have gone extinct as our own species has plundered this miraculous planet in the quarter millennium since Edwards’s day, building our entire global economy on a willful blindness to the real wealth of this world: its “soil, water, forests, minerals, and wildlife.”

Working with material from the wonderful Biodiversity Heritage Library, I have color-corrected and restored (to the best of my ability and the best 260-year-old paper allows) the most wondrous illustrations from Edwards’s Gleanings to make them available as prints and face masks, with proceeds benefiting The Nature Conservancy’s endeavor to save and steward what remains of our irreplaceable living world.

There is the almost unbearably sweet-looking Al Jerbua, with the pyramids of Egypt seen peeking behind it — the tassel-tailed hopping desert mouse of Arabia, now known as jerboa, which Edwards found remarkable in that while it can running at an impressive 15 miles per hour, “it hops like a Bird, on its hinder Legs, never letting its fore Paws on the ground, but generally hides them in the Furr under his Throat.” There is the cagui monkey, now known as marmoset, with its smiling face haloed by its friendly fan of black-and-white fur, crouching next to a snail so charming one wishes to take it for the marmoset’s playmate, when it is indeed its prey.

There is the strangely humanoid sloth, sitting like a clawed, face-painted Buddha on his meditation mound. There is the “Middle-sized Black Monkey” Edwards met through a friend — a creature never previously described, “about the size of a large Cat, of a gentle nature with respect to hurting anyone,” fond of “playing with Kittens, as most Monkeys do.”

Curiously, the three-volume series opens with the sole plant-only illustration in the entire set — the “apple-service,” which looks “like a yellowish green apple, tinged with red, on the side which is exposed to the Sun” — and with an homage to the remarkable Elizabeth Blackwell, who had depicted the “pear-service” a quarter century earlier in the world’s first illustrated encyclopedia of medicinal plants. It is a strange and touching choice for the elderly Edwards to begin his monograph, devoted to the natural history of animals, with an acknowledgement of his debt to the young woman whose work on the natural history of plants had shaped his own artistic development.

When Edwards died in his eightieth year, he bequeathed the fortune he had amassed by his tireless artistic and scientific labors to his two sisters.

But although he was awarded the Copley Medal — the most prestigious scientific honor before the controversial creation of the Nobel Prize — Edwards was, like all of us inevitably are, like even the greatest geniuses inevitably are, still a product of his time and place. His was an era that saw science not as an instrument for magnifying our understanding of reality but as a mirror for affirming the perfection of a religion-invented creator god. In the final years of his life, Edwards composed a striking confession, framing his passion for natural history and science as a guilty vanity distracting him from his religious responsibility:

My petition to God (if petitions to God are not presumptuous) is, that he would remove from me all desire of pursuing Natural History, or any other study; and inspire me with as much knowledge of his divine nature as my imperfect state is capable of; that I may conduct myself, for the remainder of my days, in a manner most agreeable to his will, which will consequently be most happy to myself. What my condition may be in futurity is known only to the wife disposer of all things; yet my present desires are (perhaps vain and inconsistent with the nature of things!) that I may become an intelligent spirit, void of gross matter, gravity and levity, endowed with a voluntary motive power, either to pierce infinitely into boundless etherial space, or into solid bodies; to see and know, how the parts of the great Universe are connected with each other, and by what amazing mechanism they are put and kept in regular, and perpetual motion. But, oh vain and daring presumption of thought! I most humbly submit my future exigence to the supreme will of the one omnipotent!

Dwelling as I do in the lives and letters of long-gone visionaries, I have marveled again and again at how even the farthest seers are simply unable to bend their gaze beyond their era’s horizons of dogma and possibility. And yet the horizons shift with each incremental revolution as the human animal peers outward to take in nature, then turns inward to question its own givens. The most substantive leap our species has made in the epochs since Edwards is not any particular scientific discovery or invention, but our general unblinding to the nature of reality and the reality of nature, to reality as staggering enough in its own right and haloed enough with the holiness of its shimmering complexity not to necessitate the invention of gods, superstitions, and other nursery rhymes for the mind in order for life — this life, this improbable and only and absolutely glorious life we have — to feel like enough, to feel like the living miracle that it is.

As a lover of the history and poetics of marbling, I have also made available the mesmerizing swirls of color gracing the inside cover of the second volume of Gleanings of Natural History.

For more pictorial consecrations of nature by other visionaries and pioneers, savor the stunning natural history paintings of exotic, endangered, and extinct species by Edwards’s contemporary Sarah Stone, one of a handful of women in the history of natural history to have broken the conservatory ceiling of her time; Peter Rabbit creator Beatrix Potter’s groundbreaking studies and illustrations of mushrooms, which mycologists still use to identify species; the remarkable story of Elizabeth Blackwell, who taught herself botanical illustration and created the world’s first illustrated encyclopedia of medicinal plants to save her husband from debtor’s prison; Louis Renard’s early-eighteenth-century psychedelic fishes from the world’s first marine encyclopedia illustrated in color; and the nineteenth-century Australian teenage sisters’ Helena and Harriet Scott’s astonishing butterfly drawings, which catalyzed one of the greatest triumphs of conservation in the twenty-first century.