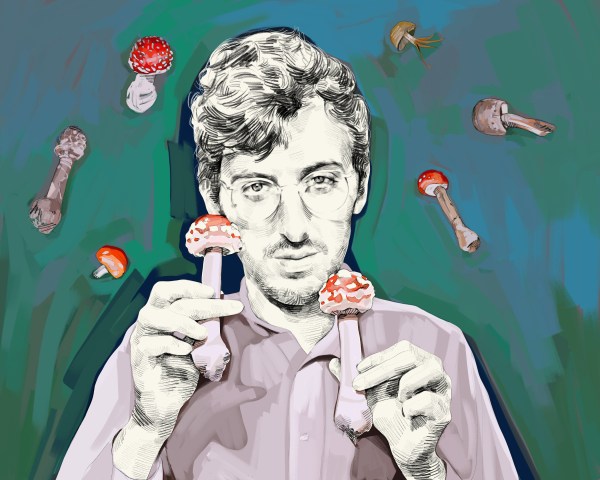 “It’s a very widespread idea that, if you have personal experience with a psychoactive drug, this biases you in such a way that the research that you do is not trustworthy. But this is something that we don’t evenly apply to other disciplines. No one would ever say that an ethnomusicologist is biased because they’ve listened to music, or because they enjoy music themselves. Or that a sports commentator is biased if they have a past as an athlete. Instead, we would say that this is something that makes him an expert who is qualified to discuss the subject.”

Hamilton Morris (@HamiltonMorris) is a chemist, filmmaker, and science journalist. A graduate of The New School, he conducts chemistry research at The University of the Sciences in Philadelphia.

Hamilton is the writer and director of the documentary series Hamilton’s Pharmacopeia, in which he explores the chemistry and traditions surrounding psychoactive drugs. His research has allowed him to study psychoactive plants, fungi, and chemicals, as well as the culture that surrounds them, in more than 30 countries, using an interdisciplinary approach that combines anthropology and chemistry.

Hamilton’s recent republishing of a book on Bufo alvarius has, at the time of writing, raised more than $205,000 for Parkinson’s disease research.

Brought to you by Dry Farm Wines natural wines designed for fewer hangovers, LMNT electrolyte supplement, and Oura smart ring wearable for personalized sleep and health insights. More on all three below.

This episode is brought to you by Dry Farm Wines. I’m a wine drinker, and I love a few glasses over meals with friends. That said, I hate hangovers. For the last few months, all of the wine in my house has been from Dry Farm Wines. Why? At least in my experience, their wine means more fun with fewer headaches. Dry Farm Wines only ships wines that meet very stringent criteria: sugar free (less than 0.15g per glass), lower alcohol (less than 12.5% alcohol), additive free (there are more than 70 FDA-approved wine-making additives), lower sulfites, organic, and produced by small family farms.

All Dry Farm Wines are laboratory tested for purity standards by a certified, independent enologist, and all of their wines are also backed by a 100% Happiness Promise—they will either replace or refund any wine you do not love. Last but not least, I find delicious wines I never would have found otherwise. It’s a lot of fun. Dry Farm Wines has a special offer just for listeners of the podcast—an extra bottle in your first box for just one extra penny. Check out all the details at DryFarmWines.com/Tim.

This episode is brought to you by Oura! Oura is the company behind the smart ring that delivers personalized sleep and health insights to help you optimize just about everything. I’ve been using it religiously for at least six months, and I was introduced to it by Dr. Peter Attia. It is the only wearable that I wear on a daily basis.

Try it for yourself. The Oura Ring comes in two styles and three colors: Silver, Black, and Matte Black. For $299, you can give or get the gift of health by visiting OuraRing.com.

This episode is brought to you by LMNT! What is LMNT? It’s a delicious, sugar-free electrolyte drink-mix. I’ve stocked up on boxes and boxes of this and usually use it 1–2 times per day. LMNT is formulated to help anyone with their electrolyte needs and perfectly suited to folks following a keto, low-carb, or Paleo diet. If you are on a low-carb diet or fasting, electrolytes play a key role in relieving hunger, cramps, headaches, tiredness, and dizziness.

LMNT came up with a very special offer for you, my dear listeners. They’ve created Tim’s Club: Simply go to DrinkLMNT.com/Tim and select “Subscribe & Save” on any 30-count box of LMNT for only $36. This will be valid for the lifetime of the subscription and you can pause it anytime. And perfect for the warm days, they have a new flavor, Watermelon Salt, which I’ve been quite enjoying.

Would you like to hear my last conversation with Hamilton Morris? Listen here to hear us discuss basic chemistry literacy for the layman, the value of substance-induced spiritual experiences for those who don’t consider themselves spiritual, the difference between a medicine and a poison, a cautionary tale about the unsupervised use of 5-MeO-DMT, compound harvesting sustainability, and much more.