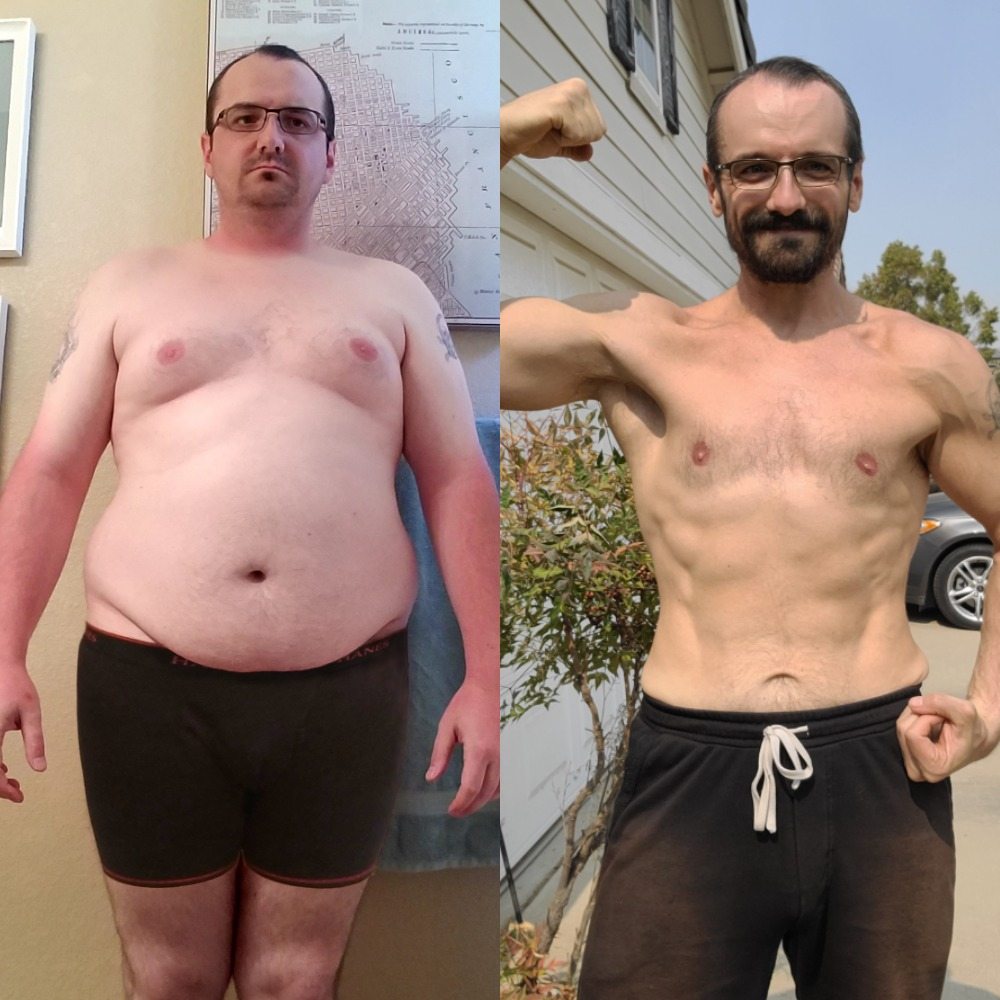 Meet Jason, a longstanding member of the Rebellion and a current client in Nerd Fitness Coaching.

He’s accomplished A LOT during the last year.

But, it’s been a long road for Jason, with many ups and down:

Jason also suspected he might be suffering from orthorexia.

Orthorexia is a condition where someone focuses on healthy eating to the point where it actually becomes unhealthy.

For example, someone with orthorexia might develop anxiety even at the thought of eating something fried or with added sugar in it.

It became so much that Jason realized he needed help. He remembered the success he had with the NF Academy and decided to see if the Coaching experience could be the answer.

So without further ado, let’s find out more about this inspiring Rebel.

“I had been overweight since puberty.

I spent a couple of decades doing what most of us do to lose weight (i.e., everything at once until we give up because it all fails).

I was at San Diego Comicon, struggling to enjoy the event because my fitness was just not there. At 260 pounds, I was out of breath the whole time. I even developed a limp by the second day, which was depressing.

I had trouble focusing on where I was. Then I happened to see someone with a shirt that said “Nerd Fitness.”

I actually remember saying out loud, ‘Wait… that’s a thing?!’

I made a mental note to google Nerd Fitness later.

(Editor’s Note: This puts a big smile on my face. Whoever you are mystery Rebel at Comicon 2017, I salute you!)

“After reading through the blog for a bit, I decided to enroll in the Nerd Fitness Academy.

I embraced the philosophy of millimeters to make miles and started small.

My first exercise was just to walk for 5 minutes. My first nutrition change was just to drink 8 ounces of water more than usual.

Because the action was so tiny, I found simply doing the activity was far easier than stressing about it for a half-hour.

All of that progressed and snowballed in an astoundingly comfortable way. In one year, I was down 80 pounds.

I went back to Comicon in 2018 and was able to comfortably walk around. I even had my own Nerd Fitness shirt:

Takeaway: When we start any big project (like losing a decent amount of weight), it can become paralyzing to consider the amount of work involved.

That’s why it’s often best to start small to break that initial inertia:

Yes, the action can seem like a drop in the bucket at first. But over time, if we’re consistent, this slow and steady progress really will start to pay dividends.

#2) Jason realized he had reached his limits.

After losing 80 pounds all on his own, Jason went on with his life:

All well and good…until a big merger happened at work. Then more responsibilities started to pile on. Soon, Jason began to back away from fitness and health.

“I found myself trying to follow the habits that I originally had success with, but they were becoming too much.

For example, I grew anxious if I couldn’t weigh my food or when I could not find the perfect match for what I was eating in a calorie-counting database (like MyFitnessPal).

I could be at a restaurant with friends, stressing over the correct proportion of ingredients in a cobb salad. What if I got it wrong? Then my calories for the day would be off.

Naturally, I’d avoid any invitation to try a jalapeno popper.

Meanwhile, my friends and wife were otherwise having a great time enjoying food and each other.

It got to a point where my normal routine just wasn’t working anymore.

But, I didn’t know how to pivot my strategy. To be honest, I was nervous about regaining all the weight I lost. That’s when I started thinking about asking for help.

Since I had so much success with the NF Academy, I decided to check out Coaching. Maybe a coach could help make things easier and less stressful?

I figured it couldn’t hurt to try it for a month or two.

Takeaway: It’s amazing when people can read a book or how-to guide, then take it and run.

I’ve seen it countless times from folks going through our free guides or courses.

The thing is, sometimes our lives change. Sometimes the success we had before won’t carry over when our situation changes.

(As someone who’s been running a business for 12 years, I know this applies to many areas of life, not just fitness).

Sure, he probably could have read another book or gone through another online course to find a new strategy.

“I think I was so nervous to switch my habits and patterns, because of how much success I initially had with them.

But my new coach offered me a new perspective:

What if we try something new, and just see how it goes?

My coach explained that if we track the results, we can make sure it’s working.

If not, no NBD. We can always try something new or pivot back.

This mindset of experimentation was very freeing for me.

We’d try what my coach called “levers,” by only changing one or two variables at a time to see how I felt.

These little experiments helped me realize I didn’t need to be locked into any specific activity. I could constantly adapt to the situation at hand.

Sometimes we can find ourselves in a rut where our strategies aren’t working anymore.

At such times, it’s okay to break old patterns and try new things.

Sure, some of these experiments might not work out. Any scientist will tell you that’s perfectly normal.

This almost worked too well.

But, sometimes our experiments WILL work out.

The important thing is to make a plan and then track the results. That’s the only way to know if a hypothesis is correct.

After experimenting with food intake for a bit, Jason learned it doesn’t have to be all or nothing.

Instead, he could focus on getting the big things right, which would allow him to ease up here or there. Especially when he was out with friends and family.

“I’ve started just focusing on the NF Healthy Plate for my meals.

My coach helped me realize that if I eat like this ‘most of the time,’ I can ignore it ‘some of the time.’

Because we tracked the results, I started to notice my orthorexia just kind of dissipated.

Now, I’ll occasionally go out and have beers and nachos (or other such “bad” foods) with friends. But I feel no guilt. It’s all been quite liberating.

Takeaway: It’s what we do “most of the time” that matters when it comes to getting in shape. That means we have a lot of freedom “some of the time.”

As long as we get the big pieces in place, we can use the small pieces to help us feel less restricted.

“I am doing (and want to do), something fitness-related every single day.

This was not the case before Coaching.

Now, I rotate between:

What’s crazy about this, is how much more energized it makes me feel. I even sleep better now too, typically 9-hours a night. But when I wake up, I feel alert, and only stay in bed because the covers are warm (so cozy).

The training helps me sleep better, and sleep helps me train better.

Takeaway: An object in motion tends to stay in motion.

This happens for a few reasons:

Plus, if we’re tired from training, we’ll find it easier to fall asleep and voila – more energy.

If ever you find yourself consistently tired throughout the day, a little bit of regular movement may do wonders.

When you speak with Jason, it becomes clear how much fun he’s having.

He started a running practice, not because his coach told him to, but because he likes to do it.

“I forgot what it was like to go fast under my own power. It wasn’t a sensation I had known since elementary school.

Now I have a splendid time pretending to be chased by zombies in my neighborhood. I go fast and can do so for miles. I am so grateful for the chance to be able to experience that again.”

Takeaway: We need to enjoy our fitness journey!

Sure, we don’t have to love ALL OF IT. But if we hate everything about it, it’s going to make for a tough road.

So we should try things that we find fun and enjoyable!

If we like the things we do, we’re more likely to do them. We say this all the time here in the Rebellion.

What Jason has accomplished is truly incredible.

But here’s an important thing to remember: it took time!

Sure, Jason crushed the last year in Nerd Fitness Coaching.

So if you find yourself in a position where you didn’t make your 2021 fitness goals, don’t be too hard on yourself:

Remember, as Jason’s journey taught us, it’s okay if all your experiments don’t work out. Just be honest that what you’ve tried might not be getting you the results you want. Then try something different.

That’s the path forward. And it’s normal and okay if you take some wrong turns on your way.

It happens to the best of us.

Plus, if you want some help for the road ahead, we’re here for you.

You can schedule a call to speak with a member of our team to find out if we’re a good fit for each other.

They’ll explain the ins and outs of NF Coaching without being all pushy and salesy (I hate all that).

It’ll just be an honest discussion on how our program works and what to expect when you become a member.

If you want to see if you’re a good fit for Nerd Fitness Coaching, you can schedule a call right here:


With that my friend, I’m out.

I’ll catch you later in the week!

PS: I couldn’t quite figure out where to put this in the story above, but I want to mention that both Jason and his coach are huge metalheads.

In between all the fitness stuff, they talk about:

Knowing that the two of them geek out about music together brings me joy.

If you join coaching, I can’t promise that we’ll pair you with a coach that shares your taste in music.

BUT, I can say that we put a lot of thought into pairing folks with coaches that will fit their goals and personalities.